BLUF: Citizen is an app that gives users real-time information on crimes & emergencies near them. The app is well designed for the average citizen but isn’t ideal for professionals in public safety or emergency response. Citizen’s information on incidents comes from scanner feeds.

About the Author: I am an Emergency Manager at a Manhattan-based University System. I have a professional background in EMS and an academic background in security policy.

Recently on twitter, I was made aware of an app called Citizen which provides real-time crime reports to users based on geo-location and allows them to stream live video of the incident. I’ll do a quick tour of the app and then share some thoughts.

Citizen is currently available in the New York and San Francisco metropolitan areas. The UI is slick and will feel familiar to users of Facebook & Instagram. On load, you see “Stories” across the top which are like small news packages Citizen produces summarizing previous events. Below that is the map, with red dots marking recent incidents, and in the lower half of the screen is a list of incidents.

Pressing on an incident opens up a new screen with details. There is a timeline of the incident with updates and clarifications. There is also a set of four buttons, allowing you to react, share, contribute media, and ‘warn’ your contacts.

Starting from the left-hand side, React does more or less what you’d expect. Share opens up the OS sharing interface and allows you to post or send a link to the incident in question. The link resolves to a web page with basic details on the incident and a prompt for the visitor to download the app. Example here.

The Record functionality allows you to live stream through the app if (a) the incident is active and (b) you are close enough to the incident. This footage is then marked a ‘verified.’ Other users can watch your live stream as it happens as well as a recording of it afterward.

The Warn button seems to act like the share button. It allows you to send a ‘warning’ SMS message to people in your contacts list. The text includes a short default message and a link to the incident. 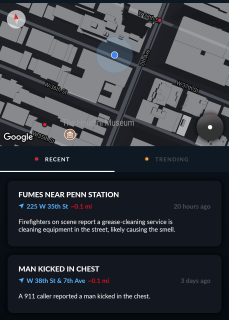 On each incident, there is also a chat section, in which users can discuss the incident.

There is no search or filter function within the app. The list of incidents is generated based on what part of the map you’re focused on. For instance, if I zoom all the way into where I am, I see only two incidents. The ‘Recent’ events list is generated based on incidents which occurred within the past seven days in the area of the map you’re focused on. A partial selection of older incidents appear in the ‘Trending’ list.

Citizen’s website says it sends out notifications when an incident occurs near you, but having had this app for several days in Manhattan, I’ve never gotten one notification. That may have been serendipity, but I’m not sure. There are no settings of any kind in the app, let alone notification settings. 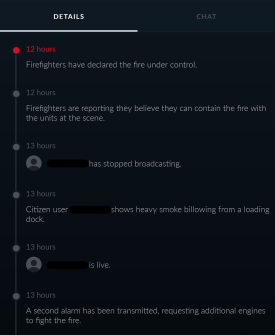 This leads me to one of my general frustrations with this app and apps like it. Slightly ironically an app designed to increase transparency is in and of itself quite opaque. The Citizen ecosystem is nearly hermetically sealed. There is no way I can find to get videos of incidents out of the app or to view them at all without having the app installed.

Citizen is not explicit about where it gets the information it pushes to the app and how it chooses what information to publish. My guess based on intuition, their FAQ section, and a job posting is that they have employees monitoring scanner feeds and typing up dispatch information.

Their website indicates that their operations team makes some editorial decisions in what they put on the app, saying quote;

“Incidents discussed on emergency communications channels are vetted by our central operations team – a group of analysts with backgrounds in public safety, writing and other relevant fields. Our team is trained to make on-the-fly decisions about what goes into the app based on complex criteria and supplementary research.“

They go on to say,

“Citizen excludes vague complaints of ‘suspicious persons’ or ‘suspicious behavior,’ in order to avoid instances of racial profiling. Our operations team also removes any non-pertinent descriptions of suspects, when those details are irrelevant to the incident.“

Which is certainly their prerogative, but it’s worth noting that what you’re getting is not an unfiltered write-up of scanner traffic.

One of the things that make Citizen different than other similar services (I’m thinking here of Breaking News Network) is that Citizen is much more restrictive with user contribution. Citizen, as the name suggests, is designed for regular people as opposed to professionals. Breaking News Network encourages any user to “report” incidents, which are vetted and supplemented by a small staff of dispatchers. While the BNN user interface is undoubtedly less user-friendly, it offers a much higher level of functionality.

For Citizen, I don’t see its current iteration as being particularly useful to me. If I could speak to the Citizen team, my feature wish-list would be as follows;

That said, my impression from Citizen’s website is that they are not aiming their product at users like me. The feature set I want may not be what their broader user base needs or wants.

I’m not clear on the what Citizen’s business strategy is. Paying to monitor scanner feeds 24/7 is not an inexpensive endeavor. At least right now I don’t see how Citizen is bringing in any revenue. Something the Citizen team may want to consider is creating a sister product for people like me. My organization may be willing to pay for a version of Citizen with the feature set I listed above.

Despite my gripes with the app, Citizen’s incident reporting is excellent. The best I’ve seen recently available to the general public for free. For the average person in Manhattan or San Francisco, it’s excellent. For the private sector professional, with some added functionality, it would be a valuable addition to your OSINT resources.

Update (05/23/2018)- This morning I received my first push notification from the Citizen App since installing it. The incident was a reported bank robbery approximately a mile from my

current location. I received the notification about five minutes after the incident was first reported, when the police were canvasing for the suspect.

Interestingly, I did not receive a notification for an earlier reported assault that was much closer to me.